The future is battery-powered. But are we overcharging the planet? 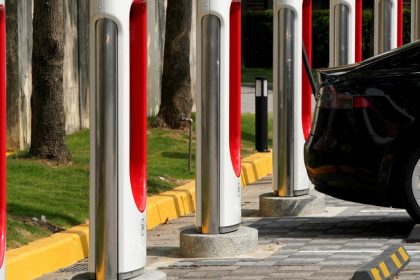 Battery technologies are fast emerging as the new front line in the sustainable energy revolution.

Last week China joined Britain, France, India and Norway in announcing plans to ditch gas and diesel cars in favour of electric vehicles. Meanwhile, the rapid growth of solar and other renewables will require energy storage technology for effective grid-scale usage. It is predicted that these trends will help push global lithium-ion battery production from 30 GWh per year today to 200 GWh within the next few years.

Questions are now being asked about whether we have enough raw materials to meet the growing demand for energy storage technologies – and how sustainable these materials are.

To accommodate these different applications, lithium-ion cells vary in size and shape. A single prismatic cell can be used in a battery in a smartphone, while 7104 cylindrical cells (similar to AA batteries, but larger) are wired together to make up the 85 kWh battery pack in a Tesla Model S car. Today, over one billion rechargeable lithium-ion battery cells are produced each year for the consumer electronics market alone. And it is our love affair with electronic gadgets that has led to up-scaled production, economies of scale, and a close to threefold decrease in lithium-ion battery cell cost in the past five years from about $400/kWh to $150/kWh.

While the sustainability of lithium is often questioned, cobalt is less often discussed. However, since 1991, when Sony commercialised the lithium-ion battery as we know it, the battery industry has depended on this element; a smartphone battery today contains 1 gram of lithium and 8 grams of cobalt. In a lithium-ion cell, cobalt is not found in its elemental form, but rather in millions of small particles of a lithium- and cobalt-containing oxide connected to the “positive” terminal of the cell. These cobalt-containing compounds are at the heart of how well a lithium-ion battery performs. They determine how much lithium can be stored in a given mass and volume, which directly impacts the energy density of the cell.

Today’s lithium-ion battery market already uses over 40% of the world’s mined cobalt. However, an electric vehicle requires 10kg of cobalt, 1,000 times more than a battery in a smartphone. With the ever-more-widespread adoption of electric vehicles and the increasing use of intermittent renewables such as wind and solar energy, the amount of cobalt needed for lithium-ion batteries is expected to increase dramatically in the coming years.

Most of the world’s cobalt comes from mineral-rich regions in Zambia and the Democratic Republic of Congo (DRC). Two years ago, Amnesty International released a report that raised awareness of child labour in cobalt mines in the DRC. Despite efforts at due diligence, industry experts concede that questionably-sourced cobalt likely finds its way into consumer applications.

If cobalt-containing compounds were easy to replace, this would have already been done for economic reasons. Compared to the cost of other transition metals such as nickel (US$15/kg), manganese (US$2/kg), and iron (ore costs less than US$1/kg), cobalt is the most expensive (US$30/kg). However, aside from lithium-iron-phosphate, which is used in many high-power applications, essentially all commercial cathode materials (that is, for the positive terminal side within batteries) contain cobalt. The main impediment to eliminating cobalt from lithium-ion batteries is finding a replacement material that still allows a battery cell to operate for thousands of charge-discharge cycles.

During charge and discharge, lithium atoms are removed from and inserted into the active materials in a cell, causing the materials to shrink and expand. Over time, this repeated mechanical rearrangement of atoms degrades the material. Lithium-cobalt-oxide (LCO) is one of the most resistant materials to this type of degradation because the cobalt and oxygen atoms are tightly bound and form a layered structure into and out of which lithium ions can slide.

Completely replacing LCO with lithium-nickel-oxide or lithium-manganese-oxide yields unsafe or unstable cells – but the cobalt atoms in LCO can be partially, and safely, replaced by nickel, manganese, and aluminium atoms. Lithium-nickel-manganese-cobalt-oxides (NMCs), for example, are used today in many cell phones, and lithium-nickel- cobalt-aluminium-oxide (NCA) is used most notably in Tesla cars.

These so-called “metal-substituted cobalt oxides” are the hot trend in the battery field. Not only do they cut down on the amount of cobalt needed by a factor of between three and five, which leads to cost savings, but putting nickel in place of cobalt boosts the energy density of the active material from about 550 watt-hours per kilogram (Wh/kg) to up to 750 Wh/kg. In 2014, 33% of cells used LCO and only 23% of cells used NMC. By 2025, it is expected that less than 20% of cells will use LCO, while more than 40% will use NMC.

Recycling
As we consider how to make lithium-ion battery energy storage more sustainable, recycling seems to be a logical path. In the United States, 99% of lead-acid batteries are collected and recycled. However, recycling of lithium ion batteries is not as straightforward. Due to the diversity of cell types and the broad range of constituent materials – which are sometimes not even specified on a cell’s packaging – approaches to recycling lithium-ion batteries are limited and often require manual sorting and handling. Some plants use pyrometallurgy, in which all lithium-ion cells that arrive at the facility are smelted. The alloy of cobalt, nickel, and copper obtained from this melt can then be processed back into the individual metals or the precursors needed for making battery materials, such as cobalt carbonate.

Have you read?
Is graphene the future in battery design?
The next supersonic airliner could be battery powered
The dark secret powering your smartphone
Recycling efforts are set to expand and could put a dent in the amount of cobalt that needs to be mined each year. There is increasing consumer awareness about the importance of recycling lithium ion batteries, and it is likely that more government regulations will enforce recycling. Furthermore, the recycling cause will be helped by the uptick in the number of large automotive cells in circulation, which are often more standardised and where the return of cells can be more easily controlled.

Given the number of batteries with large amounts of expensive cobalt in circulation today, recovery could be a billion dollar a year industry by 2025. However, this profitability depends strongly both on having large amounts of cobalt in batteries and on cobalt and nickel prices remaining high.

Over the next decade, we may see a substantial increase in the availability of cobalt. The richest deposits exploited today contain just fractions of a percent of cobalt. However, deposits 20 or 30 times richer in cobalt lie on the ocean floor. Mining rights to these deposits are being granted by the UN’s International Seabed Authority and technologies to excavate at depths of 4 kilometres are being developed, with exploitation expected by 2025.

Opening up these new mineral resources may relieve industry concerns about cobalt supplies and cost, but it also raises new questions regarding the environmental impact of cobalt mining – and may de-incentivise innovation in materials chemistry and recycling.

A path forward
We need to begin a conversation about the future of lithium ion batteries, and to develop an action plan for how the industry’s myriad players – mining companies, material manufacturers, cell manufacturers, equipment manufacturers, the automotive industry, researchers, governments, and consumers – can work together to improve the sustainability of the most ubiquitous energy storage technology.

This week at its Sustainable Development Impact Summit in New York, the World Economic Forum will launch the Global Battery Alliance, with exactly this goal in mind.

Read mor on this article at: https://www.weforum.org/agenda/2017/09/lithium-ion-batteries-ethics-global-battery-alliance/