Determining direction: The three D’s of an energy sector in transition 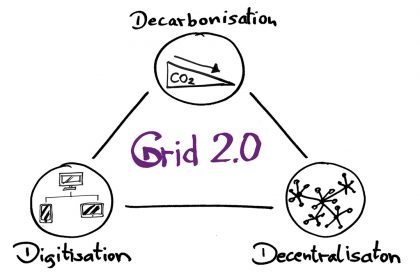 The global energy sector is undergoing fundamental change – sweeping away entrenched business models while creating new opportunities. While predicting the outcome of this ongoing disruption is notoriously difficult, it’s a safe bet that intelligent energy storage will be a key building block of Grid 2.0.

Why? Well, if you take a step back, it’s relatively easy to identify three trends driving the ongoing global reshaping of the energy landscape: decarbonisation, decentralisation and digitisation. As the landscape evolves, charting a safe course requires understanding each of these three Ds – while embracing storage early will help energy users and producers buffer any shocks when the road gets rocky.

Let’s start with the first D: decarbonisation is driven by a powerful combination of policy and market forces. As is well known, the world community has committed to keeping global warming below 2 degrees Celsius, ideally 1.5. Even the 2-degree goal implies a massive ramping up of clean energy technologies. Enter the market! With prices below 3 cents per kilowatt-hour, wind and solar PV have already proven to be the cheapest source of electricity generation in the history of mankind. And as 5.38 €-Cents for PV in Denmark has impressively demonstrated, cheap clean energy is not limited to particularly sunny places. Now bear in mind that we’re only at the beginning of the technology learning curve for wind and solar, a curve that implies that costs will continue to go down by at least 20% each time global deployments double. That, in turn, will mean that solar will cost as little as 2-3 cents in cloudier parts of Europe and North America as early as 2025 – less than eight years from now.

The second D – decentralisation – comes hot on the heels of the first: Clean technologies like wind and solar are decentralised by their very nature. Even larger installations, like offshore wind parks, are relatively spread out compared to conventional generation. And while offshore wind will play its part, most clean energy will be generated on land, often near where the power is needed. This decentralised nature brings both blessings and challenges: More distributed resources make for a more resilient system and enable small and large power consumers alike to produce much of the electricity they need locally. But, of course, decentralised resources also need to be “synced” – both with each other and to overall demand in the system.

The third trend is the ubiquitous digitisation, which also has an important part to play in keeping the decentralised energy system in sync. Advanced energy management software and control algorithms will keep grids in balance and optimise the deployment of various decentralised resources according to market (and thus, if market design is done correctly, system) needs. Such software will also allow customers to lower their energy costs by become partially self-sufficient. It will also enable completely new business models, even helping generate revenues that offset at least part of their deployment cost. It is, of course, only because of smart software that we can blur the line between consumption and production, enabling the creation of prosumers at all usage levels.

Where batteries fit into this equation
Great – but where do batteries come into all of this? Well, if you think about it, all of the three Ds presuppose smart storage. Wind and solar are cheap and clean, but as is well known they’re also intermittent, requiring storage to provide a balanced output. Decentralisation has many advantages, but will create both regional and temporal imbalances that cannot be met by expanding the grid alone. In fact, batteries are often already the more economical choice, allowing the existing power line infrastructure to be used more effectively and deferring additional investment. In regards to software: The smartest algorithms will not help you control an electron if you don’t have anywhere to store it. In fact, all the new and exciting business models that are upending traditional markets, hinge on controlling the increasingly cheap energy that is being digitally supplied by decarbonised, decentralised resources. Storage provides that control!

That is also why deploying storage can make a lot of sense in various parts of the grid – and for different players. Relatively large battery power plants enable utilities and large grid operators to manage and balance their networks more effectively. Independent power producers (IPPs) can maximise the value of wind and solar electricity with co-located storage. And plug-and-play battery systems allow commercial and industrial energy users to optimise their power needs and cost. So whether you produce, distribute or consume energy: As you navigate along the three Ds, storage will help buffer the road ahead, help maintain momentum and avoid a fourth “D”: deceleration.